During the World Youth Go Championship (WYGC) that the Malaysia Weiqi Association organized last month, (http://wygc2014.weiqi.org.my), Mr. Yang Yu Jia from the Ing Chang-Ki Wei-Ch’i Educational gave a talk on the new way to teach Go to beginners. I find this idea quite good compared to how we traditionally teach Go, at least at the beginning stage. Basically, the idea is to learn how to watch Go, i.e. how to understand what is going on in a game of Go without one having to be really good at it.

I have hung on to this concept actually from my earlier days of learning Go although Mr Yang said it much better and in a lot more depth. I remember in my earlier days, I took Go lessons from Cornel Burzo and one of the thing that stuck with me was his comment “Try to understand what is happening on the board” and in line with this, as we review the game, he explained to me what is happening, what is the story, what both sides tries to accomplish and how the opponent try to counter it and instead force his own strategy to win.

Those lessons are very valuable to me and it was that time that I try to understand what is going on although I am far from being a competent player. Every move must have some meaning to it, if not, why play the move right? And this meaning must be in the context of the game strategy, its use and effect on the board and its relationship with other stones on the board.

In my lessons in TAR UC, I have often tried to do the same, running like a mad man from the computer to the projector screen trying to explain to the class what is going on in the game and what each player tries to do and the meaning of their moves. I find teaching this way, in a visual manner, very interesting and helpful to the student to think of the game as a full board game with the aim to surround territory.

The traditional way of teaching Go starts with explaining on how to capture stones and because this being the earliest lessons, the danger is to plant into the mind of the student that Go is all about capturing and killing stones. In fact, this is very evident in the way the student plays the game, even up to reasonably high level where their whole and only focus is to capture and kill opponent stones. I have revised the beginner book a bit to reflect Mr. Yangs method. essentially, his very first ideas is to teach the students to draw lines, i.e. the relationship between stones and the board. By being able to draw these lines and understanding these lines, the student will be able to start to see the reasons why stones are played in a certain way. 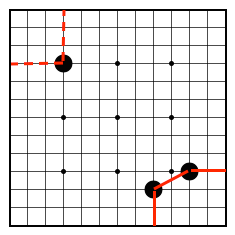 For instance, in the diagram above, if one draws lines between the stones and to the edge of the board, one can see that the two black stones on the bottom right is securing the bottom right corner while the single black stone on the top left is making a claim on the upper left corner territory.

The solid red line means that the connection is very secure and this is usually the case when there are no gaps (i.e both stones stick together next to each other) or if there is only one single gap in between them. Any farther than that, the line is drawn as a dotted line indicating that the connection is still not very secure although the relationship and intent is there. 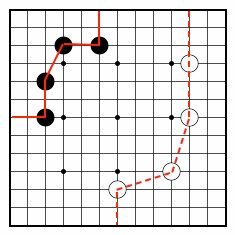 In the diagram above, you will notice that the black stones at the top left corner has secured the territory in a solid manner but the white stones have laid out a framework on the right side. Both sides have played four stones but you will notice that white has more potential to get more territories because it has laid a larger framework. Yes, the framework is a series of dotted lines which means that it is not solid but because the framework is large, the potential to convert them into a bigger territory is extremely high.

Framework is like building a house. The larger the framework means that the house has a larger foundation size and thus becomes a larger house. And because Go is a game that surrounds territories, the more territories you surround, the higher the chances you will win. 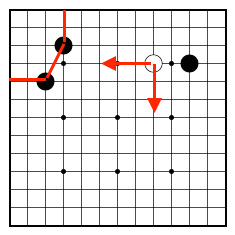 There is also the idea of breaking up the opponent’s framework line so as to prevent the opponent from turning the framework into real territory. How to break them and at which point to play to break them is also explained. All in all, I find this method of teaching the very first few lessons very fascinating compared to the traditional way of starting to teach from the liberty point of view, i.e. a stone has four liberties and take away four liberties the stone is captured.

Of course teaching liberties of stone is very important because that is how Go is played on the tactical level but I agree to not teach that in the first few lessons.

Don’t forget that these students normally know nothing at all about Go and we do not want to give them the impression that Go is all about capturing stones but instead teach them how to understand the game by just observing it.

There are a whole lot more to Mr. Yang’s lessons and in fact he has published several books to explain it. I hope everyone interested in Go education will take a look at them.

3 responses to “New Way To Teach Go to Beginners”